The architecture of Amorgos is known for its rich diversity due to the numerous invasions that the island suffered throughout the ages. Chora is the only village that has kept its original Medieval character from the early Christian times whereas the entire island is a charming mixture of Byzantine, Venetian, Neoclassical and typical Cycladic architecture, characterized by its little round-roofed white houses with blue windows and doors. Churches, monasteries like the famous Panagia Hozoviotissa, traditional windmills and historical buildings like the Secondary School of Chora create a captivating setting and atmosphere that attracts thousands of people every year.

A remarkable example of Byzantine architecture is certainly the Monastery of Panagia Hozoviotissa, known as the jewel of Amorgos and among the most beautiful monasteries in the Greek islands. Its splendid structural design, sitting at the side of a cliff offers a fascinating view to the Aegean sea and peaceful moments. Well-preserved remnants from the medieval times can still be seen in the villages of Amorgos island but the most important is definitely the Venetian Castle in Chora. The old and traditional architecture of this island is strictly guarded through the years and remains diachronic. 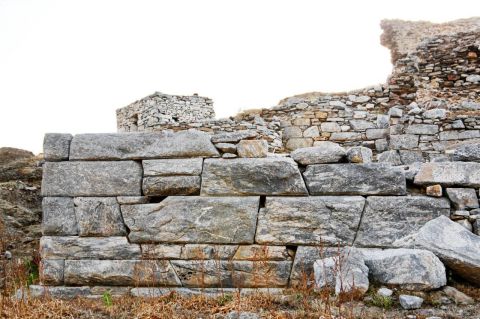