Arsani Monastery is located around 15 minutes from Rethymno by car, in the village Pagalochori. It is dedicated to Agios Georgios (Saint George), and although its construction date is unknown, the oldest script that refers to it dates to 1601, when the monastery's church of Agios Georgios was declared officially open.
An inscription on the entrance gate suggests that the monastery's facilities were expanded or renovated in 1645. Historians suggest that the monastery could have been founded sometime during the Middle Byzantine Period, probably by a monk named Arsenios, after whom it was named, although this hasn't been confirmed.

The monastery was abandoned around 1646 due to the Ottoman occupation of the island. During the mid-19th century, the earthquake of 1856 led to the destruction of its cells and the Turks destroyed the rest of the monastery a few years later.
Despite all the attempts to revive the monastery, by the beginning of the 20th century, it was practically deserted, with the exception of the foundation of a school that operated there for a few years. It only started to regain some attention during the 1930s, although the Second World War blocked all restoration plans.

Reconstruction works finally started in 1970 and during the late 1980's and early 1990's, the project was considered fully implemented after the embellishment of the church's interior with murals and the establishment of a small ecclesiastical museum.
The museum houses a rich collection of ecclesiastical findings that originate from various monasteries in the region, including icons, books, manuscripts, ecclesiastical clothing, and ornaments.
The most recent addition to the monastery's facilities is a conference center.

Currently, the oldest part of the monastery that retains its original form is the church, which was built in 1888. The icon of Agios Georgios also dates to the 19th century. 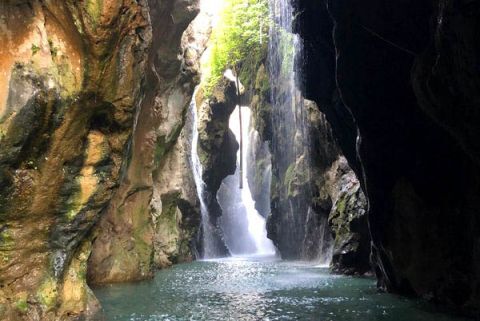