The Monastery of Toplou in Palekastro, Lassithi Crete: The Monastery of Toplou is one of the most important and historical monuments in Crete. It is located 12km north of Palekastro (or Paleokastro), on the northeastern side of Crete. The monastery was founded in the mid 15th century but it was devastated during a severe earthquake in 1612. The Venetians contributed to the reconstruction of the monastery, but it was again destroyed during the Ottoman conquest of Crete.

The monastery is built in a remote location and its architecture looks like a castle. In the first years of its operation, it was named Panagia Akrotiriani, which means Virgin Mary of the Lighthouse. It was renamed during the Turkish domination. The main building is three-storied including the monk cells, rooms, and storage areas. It is definitely one of the most imposing monasteries in Crete.

Currently, the monastery seems to own a huge stretch of land in the northeast of Crete. This is one of the main reasons that the area has retained its unspoiled and natural landscape. The monastery is dedicated to Virgin Mary and Agios Ioannis Theologos (Saint John the Theologian). Today it hosts a museum with Byzantine icons and several interesting engravings.

The rooms and halls include historical exhibits that reflect the monastery's role during the Byzantine period. The exhibits also depict the way of life of the monks who kept themselves occupied with various activities. Near the monastery, there is a small cave which functioned as a shelter in World War II.

Photos Of Monastery of Toplou by Greeka Members 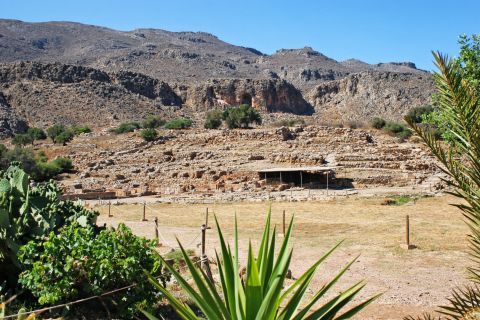