Halepa is a suburb of Chania town and one of the most beautiful neighborhoods in this region.
Located east of the center of Chania, Halepa is a historic place full of impressive mansions and neoclassical houses.
During the previous centuries, it was the upscale part of the city and many prominent people such as politicians, wealthy merchants, and aristocratic families used to reside there, most of which, built residences with a western European influence.

This is also where the agreement known as the Pact of Halepa was signed in 1878, putting an end to the Ottoman occupation period and marking the beginning of the autonomy of Crete.

Although many of the old buildings have been deserted, several are in a good condition.
A walk around Halepa will allow you to travel to the 19th and 20th centuries.

What to see in Halepa

Strolling around the area, you will find a few historic buildings, as well as churches and other places of interest.

• The House of Venizelos

The statesman Eleftherios Venizelos was one of the most prominent leaders in modern Greece. His house in Halepa was constructed by his father and it is where he spent many years of his life. The House of Venizelos currently operates as a museum, with an exhibition dedicated to the life of Venizelos. Find more information here.

Elena Venizelou was the second wife of Eleftherios Venizelos. On this square, you will find a metallic statue of Venizelos that was constructed while the couple was still alive.
Around the square, one building houses the National Research Foundation "Eleftherios K. Venizelos", formerly known as Villa Bloom. The villa was constructed by the merchant Emmanuel Bloom during the mid-19th century and for a while, it also housed the Italian Embassy.
Right by the building, you will see the Catholic church of the Nativity of Mary that was also built during the 19th century. The construction works started in 1878 and lasted one year and the church fulfilled its purpose to become a religious center for foreign consuls who resided in Chania. The church was abandoned and partly damaged during the Second World War and its restoration took place in 1996. It has been fully functional since 1997.

• The Palace of Prince George of Greece and Denmark

Built in 1882, the neoclassical villa where Prince George started living in 1898 is one of the signature landmarks of Halepa. The now abandoned palace is in relatively good condition, although it has been abandoned for several years. During the mid-20th century, it housed a military hospital.

• The Church of Agia Magdalini

The church dedicated to Saint Magdalene is definitely one of the most beautiful buildings in this area. Its Russian architecture is a rare occurrence when it comes to Orthodox churches in Greece. Prince George built the church in memory of his wife and his sister. The construction started in 1901 and finished in 1903 and it was funded by the Grand Duke George of Russia.

Despite its impressive design, the neoclassical building of the former Greek Embassy has been left to crumble ever since Crete regained its autonomy and became a part of the modern Greek State. Its entrance is now closed and some of its exterior walls have been vandalized.

The former building of the German Embassy is one of the best-preserved ones and it currently houses a hotel. It was built in 1870 and you will find it on the hill of Halepa.
The French Embassy has unfortunately not been restored and although it has been heavily damaged, one can easily guess that it used to be one of the most impressive buildings in the area. It is located near National Research Foundation "Eleftherios K. Venizelos".
The Austrian-Hungarian Embassy has also been turned into a hotel. It was constructed during the late 19th century and it became private property in 1933. It was the first neoclassical building in Chania that underwent a full restoration.
The former British Embassy on Venizelou Str. 164 is another successfully restored mansion that now houses a luxury hotel.

With a neoclassical style of architecture, the main building of the French School was constructed in 1858. It has been a state property since 1970 when the school was shut down and it currently houses the Technical University of Crete.

• The Church of Evangelistria

Dedicated to the Virgin Mary, this Orthodox Christian church is among the biggest ones in Chania. It is a cruciform church with a dome and two bell towers. Its architecture is quite impressive, with many neoclassical elements, blending the Orthodox tradition with the aesthetics of ancient Greece.
It was officially founded in 1908, although it opened its gates to the public in 1923. Lack of funding is the reason why it took several years to construct and eventually, mostly donations made by Cretan expatriates were used.
Its bell, central chandelier, and various other ecclesiastical objects were brought directly from Russia. The church's iconostasis is one of the most beautiful parts of its interior.

This unusual building is a blend of the modern and Ottoman architecture styles, reflecting the city's history and the changes it underwent over time. The Tower was originally constructed during the 18th century in order to house a Turkish Aga. The structure was designed to resemble a Venetian-style fortress and although the tower's fortification was created only for aesthetic purposes, eventually it became functional by offering shelter during the Cretan Revolution in 1897.
The Tower was severely damaged due to bombing that occurred during the Second World War and what was left of it was incorporated into a modern building.

The waterfront neighborhood of Tampakaria is the only part of Halepa that has an industrial background. During the 19th century, there used to be over 80 tanneries in this area and leather production was a central aspect of the economy of Chania until the Second World War. When the war was over, the use of modern machinery replaced the old traditional tanneries.
Most of them are currently abandoned, with very few exceptions. There have been attempts to restore at least a few of the old tanneries, while some of them have been renovated and turned into restaurants and taverns with a nice view of the sea and the historic neighborhood.

Kouloura is a small naturally occurring pool with crystal clear waters where you can swim. It is rocky and not an actual beach, safe for diving from the rocks, and only 2 meters deep.

• The Church of the Transfiguration of Jesus

This is a small traditionally designed church, not really known as a tourist attraction. Its location makes it an excellent viewpoint since it offers a wonderful view of the sea and the little pool Kouloura.

• The Church of Agia Kyriaki

Located near Tampakaria, the small chapel of Agia Kyriaki replaced the ruined monastery of Agia Kyriaki which was constructed during the early 16th century. The old monastery used to be one of the most powerful ones in the region. 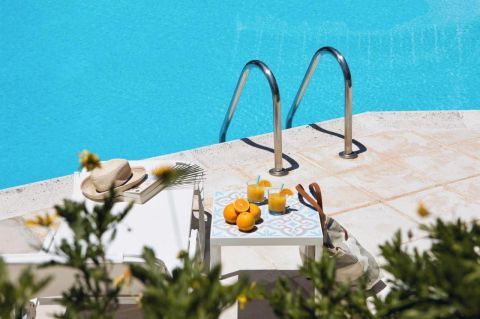 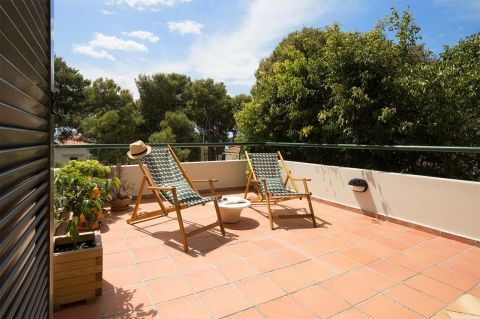 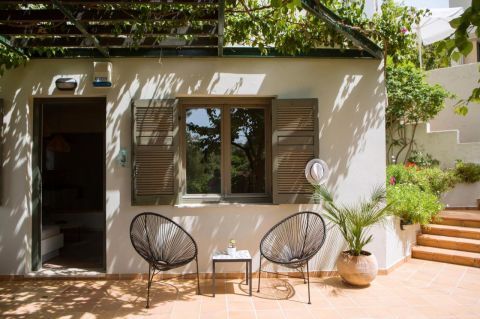 Recommended for: Family,Value for Money

Providing carefully designed apartments with a warm and welcoming atmosphere, Villa Pefki is situated in Agios Matheos, near the center of Chania Town. The villa is surrounded by greenery and among its shared facilities, you will discover a large swimming pool with sun loungers. 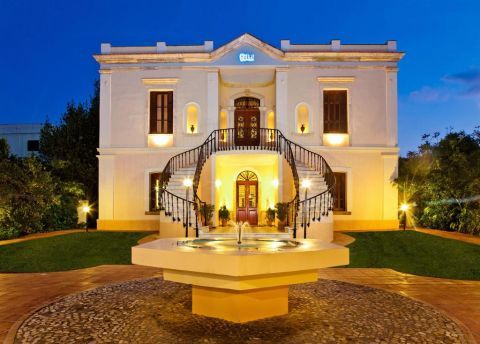 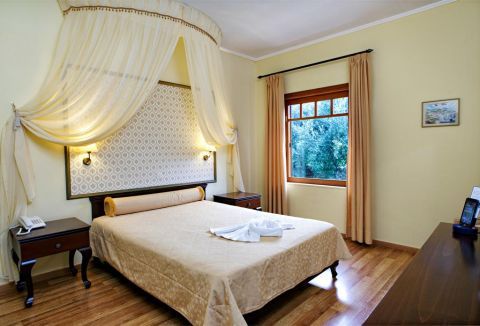 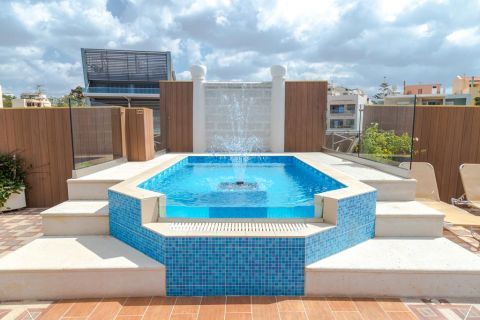 Located in the serene setting of Halepa area, a few minutes from the historical centre of Chania city, this luxurious hotel offers genial hospitality and elegant accommodation, close to all contemporary amenities. Shops and restaurants can be found within a short walk, while a magnificent sea and ... 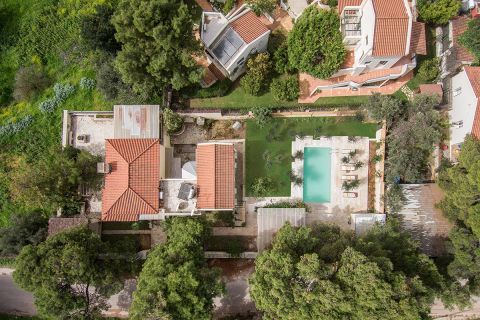 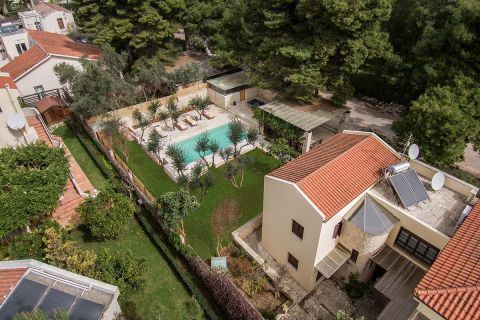 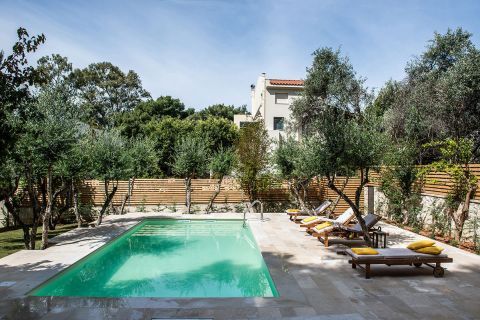 Offering a swimming pool and a garden, Koukounari Luxury Villa offers accommodation a short drive away from Chania Town, in the area of Agios Matthaios. The villa is surrounded by greenery and it provides the perfect environment for a private and peaceful vacation. It is fully equipped, with a ...

The House of Eleftherios Venizelos 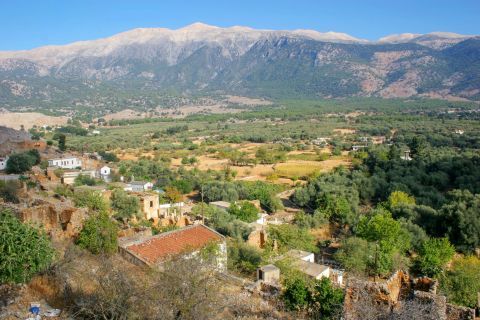 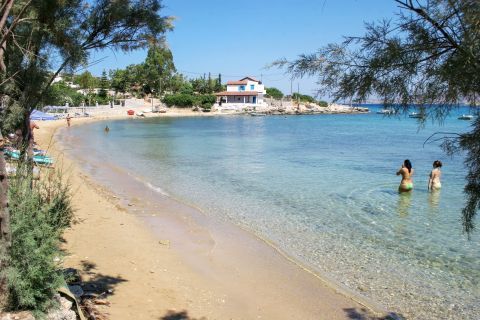 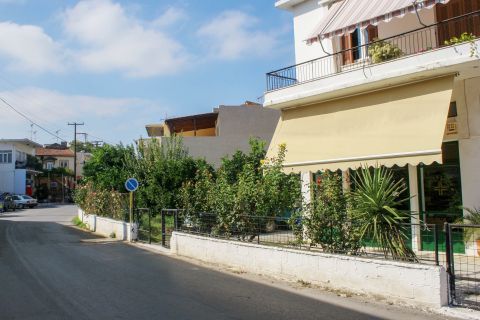 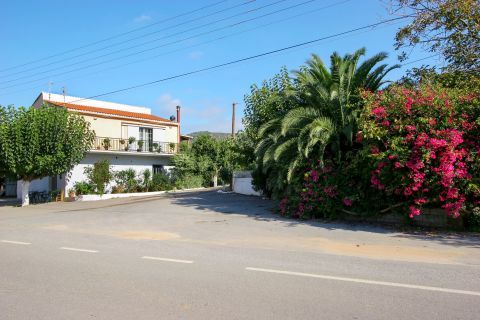 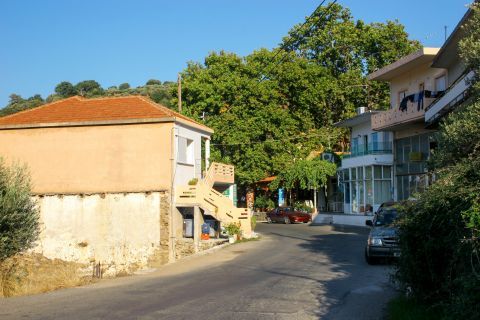 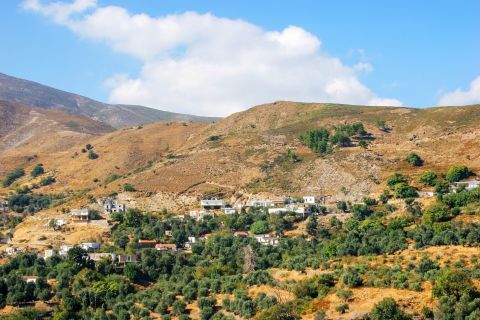